Originally written for Baby Loss Awareness Week 2020, one of our volunteer counsellors, Danielle, shares her own story of miscarriage to help us all open up about this difficult but sadly far-too-common experience.

I think we can all agree that 2020 is a terrible year. Pandemics, lockdowns, health crisis, lots of ruined plans and disappointment…but for me, 2020 isn’t so bad, because it has nothing on my 2016.

2016 was set to be the greatest year of my life to date. I welcomed that year with a Hogmanay, surrounded by my closest family, sipping non-alcoholic fizzy wine, and dreaming of the little baby that was growing inside of me. I had announced my pregnancy to my family a few weeks before Christmas by putting a copy of the scan picture in their Christmas cards. This was going to be the first grandchild on both sides of the family – first great grand kid, first niece or nephew to our siblings, so everyone made a real fuss. There had been a buzz in the air ever since and we were all beside ourselves with excitement of what was to come next.

I was not naïve to the fact that miscarriages happen and how common they are. My partner and I hadn’t told a soul about the pregnancy until the 12-week scan. Even in the lead up to the scan, I kept telling myself that there was a chance I was going to be disappointed – there might not be anything in there, it could have been a false positive all along, or it might have just went away. However, we went to the scan and it was absolutely perfect. We saw a baby jiggling around in there, it was measuring perfectly, and we were given an expected due date of the 6th of June. What a beautiful birthday to have – 6th of June 2016, early summer, warm and sunny with the smell of spring still lingering in the air. It was perfect. In my eyes, that was us out of the woods! We saw the baby and it’s healthy and it’s going to be born in the summer. We were ecstatic to start sharing the news, and we did - with absolutely anyone who would listen.

So that Hogmanay, I was consumed with wistful dreams of the year ahead. I would be spending the first half of the year growing this baby, seeing my body change, finding out the gender, having a baby shower, coming off work, planning and preparing for birth. Then I would spend the second half of the year as a first-time mother. Getting to know my baby, introducing them to their big loving family. I already knew about some parties and weddings happening later in the year. We’d have the baby in tow – how cute! What would I dress her or him to their first wedding?

I am sure you will have guessed by now that this story does not have a happy ending, so I’ll cut to the chase – 14 days after this blissful Hogmanay, our world came crashing down. I had started to get a bit twitchy that I was now 19 weeks pregnant but hadn’t felt any movement yet, and I didn’t have much of a bump. A quick Google search assured me that this was normal in a first pregnancy and could have a lot to do with how baby was lying and where the placenta was positioned etc. So, my mind was eased. I did, however, buy a home doppler to listen to the baby’s heartbeat as I just couldn’t wait for that 20-week scan which was only days away. It was the evening of the 13th January that I tried this home doppler and couldn’t find a heartbeat. Google again told me that this was normal, especially in a first pregnancy and to shut up and go to bed, which I did. It was clear to my colleagues at work the next day that something was niggling me, so I told them about my concerns, and they encouraged me to nip along the hospital, just to ease my mind once and for all. I called ahead and set on my way to the maternity triage, alone, calling to my boss that I would be back soon…because of course I would! - they will do a quick check, maybe a quick scan, I’ll see everything is fine and I’ll be on my way.

The lovely midwife at triage saw me right away, and reassured me, as Google did, that the no movement, no bump, and no heartbeat on the home doppler was all normal. She then proceeded to listen in to my stomach herself. I could feel the panic start to rise as she moved the wand around my stomach and nothing was coming through. She can’t find it. Something’s wrong. We should hear it by now. The midwife tried to reassure me that it was still early to find a heartbeat with a doppler so we would do a scan instead. I got wheeled into a dark room where a doctor was ready to perform an ultrasound on me. She told me that she would keep the screen turned away, and that she would remain quiet, until she found her bearings. I appreciated this heads up of what to expect and lay there quietly as she had a look around. The midwife was still with me, holding my arm, and I was staring at the ceiling willing for this to all be a terrible nightmare. After a few minutes, I felt the midwives grip tighten on my arm and the doctor turned to me and said those horrible words that I knew were coming.

“Sorry, there is no heartbeat”.

Apparently, my baby was only measuring 17 weeks, meaning that it had stopped growing and passed away sometime around that blissful Hogmanay while I ignorantly made plans for them. Weeks had passed and I had no idea my baby was no longer alive inside me.

The days that followed are a blur of confusion and anger and disbelief. My body still thought I was pregnant and hadn’t started passing the pregnancy tissue, so I had to be induced to deliver the baby, which is not something I had ever considered in the past when I thought of miscarriage. The whole process took two days and on the 16th January 2016 I delivered and held the tiny baby I had been carrying for 4 months. As strange as it may sound, and despite the physical and emotional pain, that is still a very special day that I often look back on and wish I could re-live, as it’s the only time I had, and ever will have, with my first child. Once the delivery was over and I went back home, I felt empty in every sense. I was glad to have gotten the delivery over with, but usually after that you take a baby home with you and you have the exciting stuff like announcing their name and sharing your birth story. Our baby didn’t have a name, we didn’t know the gender yet so we hadn’t picked one and we couldn’t bring ourselves to do it afterwards –  and as much as I felt a desire to still share my birth story, I felt that no one would want to hear it under the circumstances.

Since meeting other bereaved mothers, I have found that many also experienced the phenomenon of wanting to talk about the child they lost, the birth, what they looked like, even share pictures - yet there is a sense that others would feel uncomfortable with this so they keep it to themselves which grows the feelings of loneliness and increases the stigma around child loss. I know it’s an uncomfortable subject, and had I not gone through it myself, I too wouldn’t know how to react or what to say when someone talks about losing a child. However, I have learned that others’ discomfort isn’t more important than my own. It is ok for me to honour my experience by talking about it, and it is also good to raise awareness and give other bereaved mothers the outlet to honour theirs.

So, the rest of my 2016 was tarnished with painful jolts of remembering what should have been happening throughout that year. Today would have been my 20-week scan…today I would have announced the gender…today would have been my last day at work (which incidentally turned out to be another pregnant colleague’s last day at work and I got to watch her team throw her a celebratory picnic out on the lawn – that was hard).  My 25th birthday was supposed to also be my baby shower, and oh my goodness it was the most beautiful sunny day, absolutely perfect weather to have spent in my mum’s garden, sweating and complaining about my huge heavy bump while loved ones brought me iced lemonade and made predictions of when baby would arrive. Instead, I spent that birthday hiding indoors and I don’t think I have enjoyed a birthday since.

I guess the point to my story is that miscarriage and child loss is such a significant life event, which ricochets into many other parts of someone’s life. As much as women remind themselves not to get too excited when they see that positive pregnancy test, it can’t be stopped – life flashes before your eyes. Hopes. Dreams. Plans. Regardless of how early or late in a pregnancy you experience the loss, you have still thought of a life with this child and are entitled to grieve for your loss and talk about it.

If you need support with your grief, no matter when you experienced the bereavement, please call our free helpline: 0808 802 6161 or start a webchat on this site. We understand your pain and we are here to help. 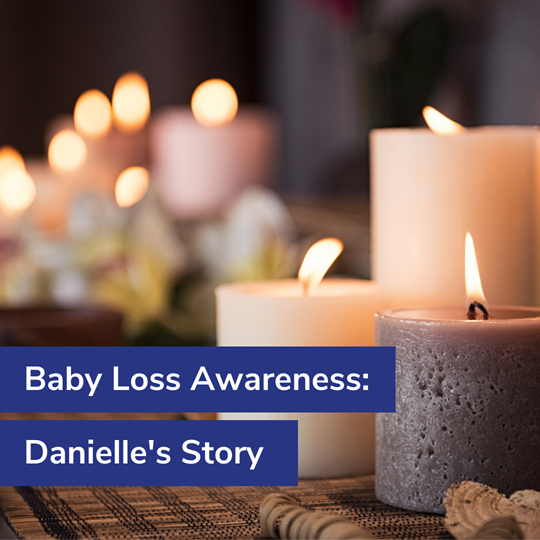 Danielle is a qualified psychologist and counsellor who has volunteered with Cruse Scotland since 2019. Her journey to become a counsellor began after she experienced a miscarriage in 2016 and felt "stuck" in her grief until seeking counselling herself. She felt how useful it was to have that safe space to explore her feelings and wanted to be able to create that for others who were on a bereavement journey. She studied Pluralistic counselling part-time at Abertay while also working and raising her young family (one of which was still in the womb during her Cruse training!). Danielle has a particular interest in pregnancy loss and fertility struggles but works with all types of loss at Cruse.