Coping with Cancer during Coronavirus

Today, on World Cancer Day, we share a personal story of a colleague who has lived through this experience. We thank her for offering her reflections, and her suggestions for how you can help people coping with cancer at this time.

The pandemic has been a difficult time for everyone, but for those living through the pandemic and receiving a cancer diagnosis, it has been exceptionally hard.

A personal journey of terminal cancer during the pandemic

I’d been a major part in family members’ journeys with cancer before, so was prepared for the rollercoaster that lay ahead, but this time was very different as it was amidst the global pandemic, and it’s been tough. Unbelievably tough.

My mum had her CT scan on Friday 13th March 2020. She was oblivious to what they were checking for at the scan, and she was angry with me when I suggested this. If I had known what was about to ensue, I would never have said that to her.

Following her CT scan, she received an appointment to meet with her consultant 10 days later to discuss the results. The appointment was cancelled at the last minute – because the Prime Minister had just declared national lockdown. No alternative appointment was given at this stage, because no one was sure what was happening. This was unprecedented times for the hospital clinic staff and the whole nation.

The wait for Mum and I was unbearable. Waiting is tough at the best of times, but waiting with no date to work towards is so hard. After what seemed an eternity, Mum was advised that the consultant would meet with her for the results, but would need to conduct this by phone, and they asked ahead of the time that she have me with her. This was a long six weeks after her scan.

I assumed that Mum would have realised that requesting my presence on the results call indicated that the news she was about to receive was not going to be positive. It was clear, however, from her reaction that she was shocked.

Receiving news that you have cancer is scary, but receiving news you have terminal cancer is numbing… Everything stops. It’s surreal, and when you finally compose, you see your world and what is important change in almost an instant. Having to have this crucial conversation over the phone was just awful. Mum was so silent, the consultant had to keep asking if she was still there. It was so hard for the consultant not being able to see Mum, and recognise that she was simply just computing the news that had been delivered. It was incredibly awkward, for everyone. The consultant went on to explain that in normal circumstances, Mum would be offered chemo, but because the pandemic was so new, the advice was to defer the treatment for 2-3 months as the risks of having chemo with reduced immunity would make her very vulnerable to Covid-19. Looking back, this time was also probably useful for Mum to process everything and gradually adapt to what was now, sadly, her new reality.

Despite the consultant’s initial advice being that treatment should be deferred, Mum’s condition worsened quickly and after some weeks, the decision to embark on chemotherapy became ‘now or never’. So, despite the risks around the pandemic, her chemo journey began. Unfortunately, due to Mum’s deteriorating ill health, her body did not cope with the chemotherapy well. She had terrible side effects and decided to abandon the treatment after the 2nd round. These key conversations continued to be held by telephone.  I cannot express in words how awful this was. Discussing ceasing treatment and clarifying no more could be done was so hard to hear this way.

What both Mum and I found most difficult was all the support information leaflets given to her throughout this journey. The leaflets promoted all the wonderful things that were usually available and which she would have found really helpful.  This included group support where you could meet others in a similar position, complimentary therapies such as massage and relaxation, 1-2-1 talking support with a counsellor – but none of these services were available during the pandemic. It felt like a cruel episode of Bullseye: “here’s what you could have won…”. Even the 1-2-1 support, which was still available, was by phone but was with a different person each time, and so each call meant reliving her journey to date, rather than checking in at her present state. It wasn’t helpful to her at all.

With Mum unable to continue her chemotherapy and her condition rapidly worsening, she developed metastatic spinal cord compression, resulting in paralysis of her legs, this resulted in a five-week stay in the oncology ward. Due to the high risk of chemo patients within the ward, visiting was understandably very restricted. Therefore, poor Mum could only have one nominated visitor, which was me. For her, this was a time in her life when she needed to have the company of friends and family around her, but this just wasn’t possible. In addition, she seemed to be in a ward where the majority of patients were receiving treatments and expected to improve, and were in and out after a few days, therefore their assumptions were that it was same situation for Mum. I found her regularly chatting with others on the ward; people talking about what they were going to do when they finished treatment and restrictions were lifted. It seemed that it was easier for Mum just to go with that scenario, rather than be honest and bring the mood of the conversation down.

There was no place to speak with Mum privately. All the little private rooms where families could normally meet were blocked off due to the hospital needing to adhere to strict hygiene measures, so any conversations which we probably would have had were avoided.   The patients who smoked were allowed to go outside for a cigarette, but they wouldn’t let Mum go out just to get a bit of air and the sun. It was incredibly hard not to want to lie and say she was a smoker just so she could get outside for a little while, but that was not Mum’s style.

After those five weeks of being in the hospital ward, she was able to go home. Despite knowing she’d be housebound due to her living in a top floor flat, she was so delighted to be able to return to her own surroundings. The ambulance team did a stalwart job of getting her back home, up all those stairs and settled into her own space. Sadly, it was short lived as she had a fall the next morning and was re-admitted, but for her at least, she did make it home and it was a great sense of achievement at that time.

Her last admittance was to the hospice. She was told on arrival she was too well to be there; it was only really for those right at the end of the journey and the plan was to have her moved to a small bedsit accommodation where she would have care on hand. However, her condition worsened again and she died in the hospice 12 days later.

During that spell in the hospice, she had a lovely room with a small patio area right outside, and this meant that finally her friends could come for a socially-distanced visit. She was able to sit outside in the sun with them, drink coffee, eat cake, chat. Her grandchildren were able to come and give gymnastics displays on the grass outside her window and she could wave to them and award Strictly Come Dancing style ratings on paper.

Being in the hospice meant I could also take her out in a wheelchair, around the lovely grounds, rather than her just being stuck indoors. That was a real tonic for her too. Finally for her, the last chapter was neither dictated by cancer nor the pandemic. She could do what she loved most, whilst receiving the care she needed. This was such a blessing.

For myself and the others left behind, the pandemic was still very visible in the next steps. Registering the death, making plans with the funeral director, talking with the civil celebrant was all done by phone. The funeral itself was restricted to 20 attendees and we had to wear masks in the funeral car, and only members from one household could be present in each funeral car. The funeral director and civil celebrant apologised on the day for not being able to shake my hand and Mum’s friends and family members all kept their distance, where normally there would have been a hug. There was no alcohol permitted at the traditional cup of tea afterwards, and although not a regular drinker myself, I would have really appreciated a drink and a hug at that point. It all felt a bit clinical if I’m honest.

A few months on…

It’s a few months on now and it still feels surreal in some ways, like it never really happened. It was so different to my previous experiences of cancer when other family members died, without the pandemic in the mix. On reflection, I can see that those past experiences were shared by other family members and friends, who were much more connected throughout the cancer journey in terms of visibly seeing the deterioration in physical health over time, being around at the end stage and at the planning of the funeral. This has felt a very single, detached experience, which has been very, very lonely at times.

I am grateful to know that I can speak to Cruse Scotland at any point to discuss these feelings, and it’s an added bonus that it doesn’t need to be by phone! Currently they offer a helpline, webchat or email for initial enquiries, then support is available via video counselling sessions, phone or webchat thereafter.

How you can support someone with cancer during the Coronavirus pandemic

If you know anyone going through a cancer journey, whether the patient themselves or a relative supporting them, there are lots of things you can do to show your support, despite the pandemic. Hospitals still allow cards delivered to the wards, so send a card to let the person know you are thinking of them. Make use of technology: use the phone, texts, facetime etc. It really helps people feel engaged with the outside world, and chat about normal stuff. Of course, you want to ask how they are feeling and how about their illness, but for most patients, they just want to speak about regular, normal stuff – so speak about what’s on the TV, the weather, and any decent gossip they might be interested in! If they don’t have a mobile with them, most hospital wards are now geared up with cordless phones which can be passed to patients. If they are hating the hospital food, you can organise to have their favourite takeaway delivered to them, or even an afternoon tea box.    If they are at home, you can still send thoughtful things to them: flowers, a book or magazine, a food parcel… These small acts of kindness speak volumes.

Cancer is curable in so many cases, but for those who are going through treatment, or for whom their illness is terminal, let them know you care. You will be surprised how much your gesture will mean, particularly during the pandemic. 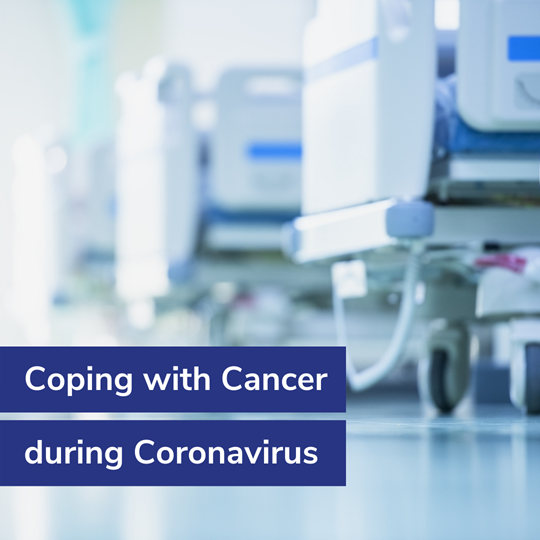