Margaret's blog: the death of my husband during lockdown

Margaret tells us about her experience losing her husband during the Covid-19 lockdown in 2020 and how Cruse Scotland helped her cope with his death.

“When my husband Ernie who had Parkinson’s Disease, COPD along with other illnesses was admitted to hospital in August 2020, I was allowed to visit him for 3 days. Then due to the restrictions on indoor hospital visits, our sons and I weren’t allowed to see him again until the day before he died. My sons were given 10 minutes each to say their goodbyes to him and I sat with Ernie for 7 hours until he passed away at 4.20pm on Saturday 26 September, exactly 5 weeks since he was admitted to hospital.

His Funeral was on 9 October. There was a limit of 20 people allowed to attend, that included immediate family. Names and contact numbers had to be taken for track and trace purposes. There was also a time limit of 20 minutes in total, that was to enter the Crematorium have the service and leave. There was no singing allowed and masks to be worn throughout. We didn’t have a gathering afterwards because there were very few places to hold it. And with the restrictions you could not mingle. As time went on I realised I had ‘lost’ the ability to have a conversation with family and friends.

We scattered Ernie’s ashes on 14 March 2021 which would have been our 46th Wedding Anniversary. The family were there. The following year, my sister and I went back to Ernie’s final resting place on 14 March 2022 and tossed two roses into the river.

After Ernie’s death my sister Fiona arranged days out and days away, but all I wanted to do was to stay at home. I know she meant well, but I wasn’t ready. We went for afternoon tea, to see 9 to 5 on stage, a trip to Oban etc. I did appreciate them and enjoyed them, but it was too soon.

I thought by January 2022 I was ready to “face” the world again, so I applied for voluntary work. It was a Helpline to support people who were grieving. I started the training which was going well until the third day, which was talking about bereavement… well I broke down trying to speak about Ernie. I was offered counselling with Cruse Scotland, I accepted it, and it was the best thing.

I started my counselling sessions with their volunteer Ann in March 2022. The first session went really well and I felt better after speaking about what Ernie was like as a person.

The sessions have been a great help to me. I now feel I can go forward with my life. I was able to talk about Ernie again and it made me feel much better. Still haven’t fully come to terms with Ernie’s death. I am sure in time I will be able to cope better. We were always together, which probably is why I feel so lonely, even although I have a good family, especially my Grandchildren.

I’ve now had my sixth and final session with Ann. It went really well, and I am going to keep going forward with the help of family and friends. I know I will have a “wobble” or two along the way… especially on anniversaries.

Before COVID, I took Ernie to his monthly Parkinson’s Group. He enjoyed chatting to people. When COVID arrived, we no longer attend because of lockdown. The group met last month – March 2022 for the first time. My sister and I still go to make the teas/coffees.

I am going to Spain on holiday in June with my son Gordon and his family. I am looking forward to it very much. I love watching the kids having fun.

Since having counselling, I now have the confidence to talk to others again and have the strength to carry on. ERNIE WILL ALWAYS HAVE A BIG PLACE IN MY HEART AND MIND. And I will speak of him every day.” 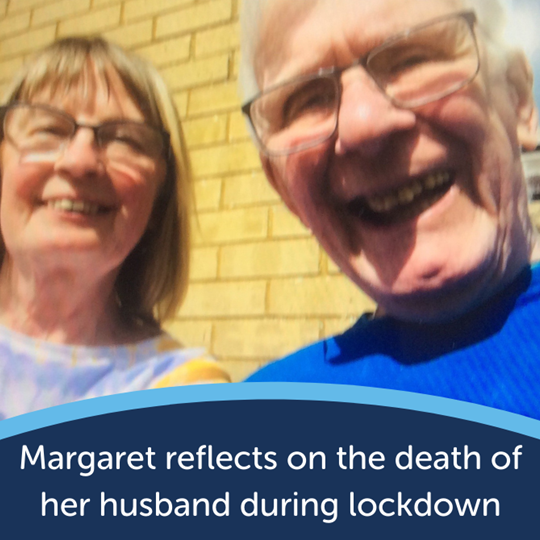