For Remembrance Day 2021, Cruse Scotland volunteer, Audrey Holligan, shares a moving encounter with war veterans when she represented our Step-by-Step groups at a Legion d'Honneur service.

I often wonder what Remembrance Day means to people. Does it bring up memories, trigger emotions, have absolutely no meaning...? How does that look each year? Do we wear the poppy, or not, out of respect to signify our own grief or that of others?

On a personal level Remembrance Day has always been extremely significant to me, coming from a long line of military families on both sides. It represents  loyalty, attachment, loss, friendships, tradition and respect. Having lost both my parents when I was young, it is a day to remember them both with pride and a warm heart. To think of them with their uniforms on, standing to attention, looking smart, full of hope.

Although I have this personal attachment to Remembrance Day, I can honestly say I had not really engaged in conversation about war with anyone other than my grandparents until I was managing the wonderful Step-by-Step group within Cruse Scotland.

This is a group open to people who have experienced death and grief and are now isolated within their community or wider family. It gives people the chance to come and socialise with others in grief while not actually having to talk about it. It's a place where grief is accepted without justification or judgement, to help them return to society.

Most of our 'Steppers', as they are affectionately known, tend to be of a certain age and life experience. They bring a colourful and extensive narrative to the group, one being their experiences of growing up or serving in World War II. I think we can forget sometimes the impact on this generation and the experiences they carry for life. They often speak of the “stiff upper lip and getting on with things”, which is to be commended... but also, it makes me wonder what that actually looks like, how that has affected their mental wellbeing, grief processing, relationships, attachments, and life choices?

A few years ago, I was invited to represent Cruse Scotland at a ceremony to celebrate D-Day at the French Consulate, where war veterans were being honoured with the Légion d’Honneur - the highest military distinction awarded by France dating back to 1802.

The ceremony required full military dress for those attending who had served, or were currently serving. The whole spectacle was breath-taking. Army, Air Force and Navy were all represented.

Five veterans were there - the youngest being 92! It really was an honour to be in their presence; this was living history to me. I had, of course, studied the Second World War at school but this was actually standing right beside me.

When chatting with these amazing veterans, I was struck that not one of them felt like a hero, not one of them really wanted to chat about their experience of D-Day, every one of them absolutely humbled to be there. Their thoughts of Remembrance Day were about fallen “brothers”, about still having to survive after the landings. The terror of another week of fighting to secure their place on French soil, the memories of leaving friends and comrades dead, dying and injured on the beach. It was very different than the sanitised version in school. These were men who were still living that day. When they spoke to me, they were still young men in the prime of life, you could see it in each of their eyes.

Remembering for them was painful, they spoke of the lives cut short who would never come back.

I will never forget listening to a chap who jumped from a war plane with a friend who was dead by the time their parachutes landed on the beach. He had been telling his story when the chap next to him asked what his friend's name was. Low and behold it was his father!! You could have heard a pin drop as they looked deeply at each other for what seemed liked a lifetime. Both men in that moment sharing memories of that soldier, father and friend that had died.

What were the chances of these two meeting? The man who’s father had been killed had brought his son with him. The son was 20 and also currently serving - and he was the same age as his grandfather was when he had had died. It was so poignant and you could feel the weight of it hang in the air. The veteran hugged his friend's son, and they both wept with so many emotions. The conversation that ensued was left for them to be private.

It was such a privilege and honour to have been involved in this event and has forever changed my memories of Remembrance Day.

What does Remembrance mean to you? Is it only for that one commemorative day, or every day? I think, for me, it was the understanding that feelings last years - decades even - and we can be back in a memory in a second!
Cruse Scotland is here to support you no matter when a death occurred. Grief is experienced differently by everyone and it can return to us at unexpected times. If you feel you would like to talk to someone kind and understanding about your feelings, please call our free bereavement helpline: 0808 802 6161. We are here to help. 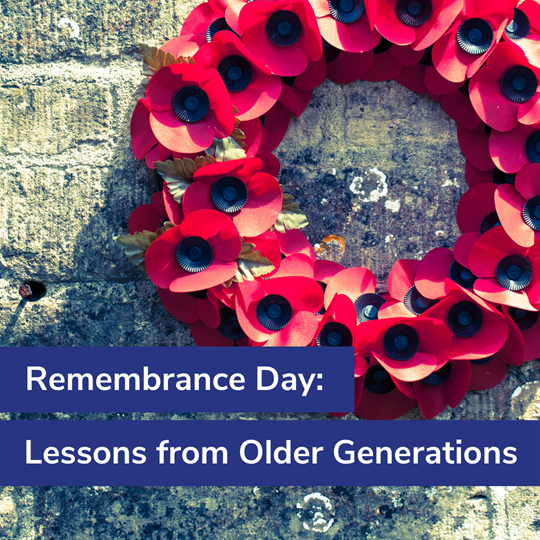 Audrey has a background in counselling and education. She has volunteered for Cruse Scotland for five years as a Children and Young People's Supporter, Step-by-Step Manager, BBC Grief Consultant and many other ‘hats'.

She is currently studying MSc Play Therapy, following her huge passion for understanding and researching trauma and grief in children and how play helps with therapeutic healing. Her professional and academic path was motivated by her own experience of both her parents dying when she was very young and recognising the importance of grief support for children and young people.

Audrey says, "to be able to contribute through Cruse Scotland is an absolute privilege. I am often humbled by the strength and resilience within the children and young people I support."

For her self-care, she enjoys drawing, socialising (tea and cake being a favourite!), walking with her dog Daisy, spending time with her precious family - and, of course, playing!