The Complexity of Grief After an Alcohol-Related Death

For Alcohol Awareness Week, Nicola Reed explores the complexities of grieving for a loved one who died from an alcohol-related cause.

August 2021 brought some stark Scottish headlines to the national press:

These headlines were off the back of a report by the National Records of Scotland (NRS) highlighting that, in Scotland, there had been 1,190 alcohol-specific deaths during 2020 - an increase of 17% from 2019 and the highest number recorded since 2008. That is the equivalent 3 people, in Scotland, per day.

Those numbers communicate one part of what is a much a wider story.

Beyond the alcohol-specific deaths, there are also many, many alcohol related deaths in Scotland – deaths where alcohol has played a part, but isn’t the immediate cause of death. These might include death through accident, suicide, violence or underlying health conditions. Deaths may have happened suddenly, or may have been the result of a long-term illness impacted by alcohol use.

Further, alcohol is reported as the biggest risk factor for all early deaths among 15-49 year olds.

It’s not just the headlines that are stark – the extent and impact is also stark.

The grief behind the numbers

Bereavement, as a result of an alcohol related death, may be very complicated:

There may be stigma around the death – friends and family may want to talk about a death caused by an accident, rather than acknowledge that the accident happened because of alcohol use.

There may be great feelings of helplessness – help that was offered but never taken - or help that was received but “falling off the wagon” brought a catastrophic ending.

Some bereaved people may be relieved – they may have watched a long and slow deterioration of their loved one that was difficult to live with and may also have had impact on the family’s financial wellbeing.

Anger may not be far from the surface – there may be thoughts that the person played a significant part in their own death and it may therefore have, in some respects, felt like a preventable death.

Getting support after an alcohol-related death

The feelings and emotions can be strong, conflicting and confusing. It can be difficult to be honest and it can be difficult to reach out for support. That is where contacting an organisation like Cruse Scotland can be useful. You'll have the opportunity to talk with someone, who is that bit distanced from the situation and who can offer a confidential, non-judgemental and compassionate space where you are able to safely talk through some of those conflicting, painful thoughts and emotions.

Alcohol Awareness Week is coordinated by Alcohol Change UK – they have produced a very helpful fact sheet about alcohol-related bereavement which is available from their website.

If you are affected by an alcohol-related death, please do use this Alcohol Awareness Week to reach out and get the support that would be helpful for you. Call our free helpline: 0808 802 6161, or start a webchat. 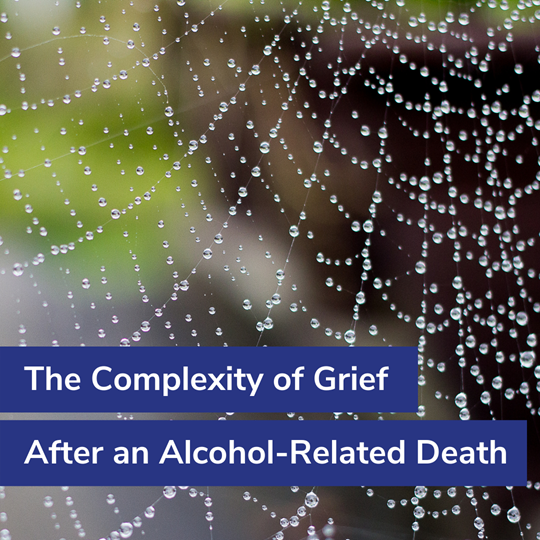 Nicola, after a 20 year career as a chartered accountant, joined the Cruse Scotland staff team as an Area Manager in April 2019. Alongside this shift from the corporate to the charity world, she also embarked on a counselling diploma, clocking up some of her placement hours with Cruse as a volunteer. This is all not as strange as it may as seem - for many years Nicola has been actively involved with a local Dundee charity which offers pregnancy and baby loss counselling and listening support - so her passion for seeing people well supported through bereavement has always been a driving force for her. In her “free time”, Nicola enjoys lots of different things – cooking, writing, crochet, parkrun, church and sometimes she even spares a bit of time for her husband and two girls!