Why do we need to 'Demystify' Death?

This week is Demystifying Death week in Scotland. Rebecca Patterson, Director of Good Life, Good Death, Good Grief – and one of Cruse Scotland’s Board Members – explains what the week is about.

Demystifying Death Week takes place across Scotland this week, aiming to ‘shine a light on death, dying and bereavement in Scotland’. But why do we need a week dedicated to ‘demystifying’ death? Don’t we all think about death enough already?!

There are lots of ways that having a little more knowledge, information and confidence around these issues could make things better. People usually want to do the right thing when someone they know is caring, dying or grieving. But often they can feel awkward offering help, or worry about making things worse. People often have questions about serious illness or death. But often they don't know who to ask. Making plans when you’re healthy means there is less to think about when you’re ill. But often people put off making plans until it is too late.

Demystifying Death week is about giving people knowledge, skills and opportunities to plan and support each other through death, dying, loss and care.

Demystifying Death Week was initiated by Good Life, Good Death, Good Grief – a charity-led collaboration of more than 1,000 individuals and organisations that want Scotland to be a place where people can be open about and plan for death, dying and bereavement.

Various organisations will be holding both online and in-person events to mark Demystifying Death Week. A full list can be found here.

There are lots of resources out there that provide information, but sometimes it is difficult to know where to look. Demystifying Death Week is an opportunity to make this information easier for people to get at, sharing it over social media using the hashtag #DemystifyDeath.

If people know a bit more about death and dying, they’re in a better position to take control of their own situation, support others, make plans and have informed decisions about what they’d want when the time comes.

We’re often told that death is a ‘taboo’ – something that people don’t want to talk about. But surveys show that in Scotland many people are actually fairly comfortable talking about death. Perhaps the right opportunities just don’t present themselves. Demystifying Death Week is a chance to open up about death, air these topics and become a bit better at supporting each other through the difficult times. 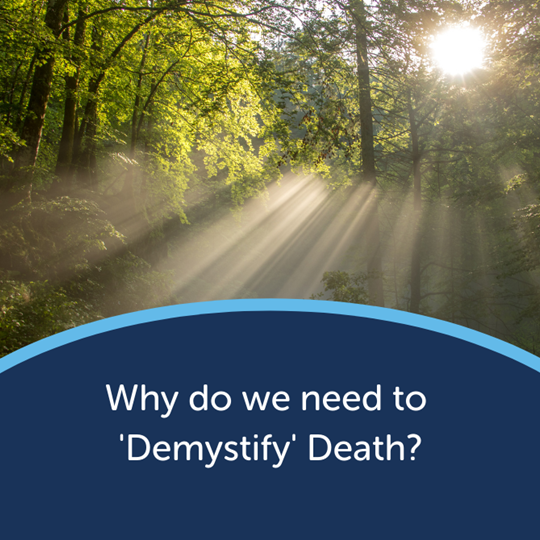