Cruse Scotland volunteer, Mo Szulejewska, has been keeping a journal for years and found writing particularly helpful when grieving the deaths of her parents. In this article, Mo describes the benefits of journal writing and offers tips to help you get started.

A safe space to express whatever you want

I’m not even sure why I originally started but a journal has now become something important in my life, rather like a valued and trusted friend to whom I can turn at any time.

I was keeping a journal regularly at the time of my father’s death and I wrote copiously in that journal in the days, weeks and months after his death. I wrote about what had happened, how the news had been broken to me, where I went and what I did in subsequent days. I wrote about the person I remembered, stories he’d told me, places we’d visited together, times we had spent together and people he had known. It helped me to have somewhere private where I could express whatever I wanted, whenever I wanted.  When I read through the entries I made in the weeks after his death, I am struck by the similarity in many of the entries – some are almost word for word repetitions of things written a few days or hours previously. Grief plays havoc with memory!

When my mother died a few years later, I wrote about her death in my journal. In the days that followed, I found something comforting in the feel of the paper under my hand, the routine of opening the journal, picking up a pen and writing. These entries are much shorter, more contained, more practical and contain fewer memories. I made lists – people seen and spoken to, things done and still to be done; I glued in coffee shop receipts, used train and bus tickets; sometimes, the only entry is a date and a page of doodles, images or a collage.

In journal writing, there are no rules

One of the best things about journal writing is that it is so flexible and there are no rules. No-one else sees what I write so I don’t need to worry about grammar or spelling – what I write is more important than how I write it! I don’t need to write every day, only when it suits me – although I did find that writing every day became a reassuring routine in the days immediately after my parents’ deaths.

Health and wellbeing benefits of writing

There are many people who find writing helpful. This has been identified by numerous studies, starting with the classic research carried out in the 1980s by James W. Pennebaker, an American social psychologist. Pennebaker’s initial study found that those who wrote about emotional upheaval made fewer visits to doctors and reported higher levels of emotional wellbeing than those who did not (Pennebaker, 2014).

The following are a few suggestions for anyone who wants some pointers to get started with journal writing:

I have been keeping a journal for years and writing helps me deal with stressful and challenging situations. If you do decide to try journal writing, I hope it brings you as many benefits as it has brought me.

If you are interested in reading about other creative activities to help you cope with a bereavement, check out our blogs on letter writing or composing poetry. 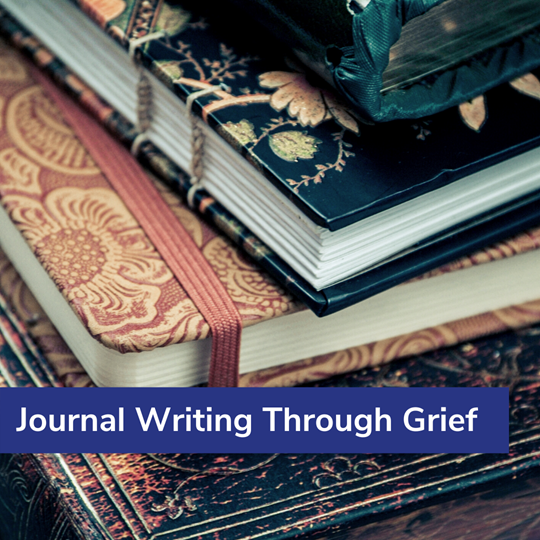 Maureen Szulejewska is a qualified pluralistic counsellor who lives and works in her native Scotland. Her academic qualifications include BA (Hons) in English, MBA and MSc in Counselling. She has a lifelong fascination with words, language and communication as well as both personal and professional experience of the positive contribution writing can offer in supporting emotional wellbeing. A seasoned journal keeper, she also facilitates writing for wellbeing and journal writing groups.